This November Eddy and Chantal from Belgium visited us again and brought some food (rice, beans and bananas) for our children, some books for the new library and a generous financial donation towards our 2018 solar project. They raised this money with the help of family, friends and one incredible twelve year old girl. 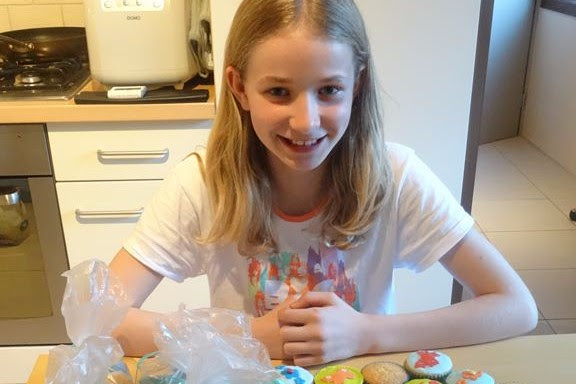 Lotte, a young girl from Belgium, worked hard for several months to fund-raise for Amani.  She earned money doing household chores for family and friends, washing cars, helping out at a butcher shop making sausages and hamburgers, and baking home-made biscuits for sale.  She even sold some of her personal belongings.  Lotte didn’t stop there!  She also made herself more aware of the lives of children in Tanzania; she used less water when taking showers, spent less time on the computer and went to school by bicycle instead of being brought by car.  Lotte’s hard work paid off and she raised € 280.  This meant she even bested the total raised by her older brother Seibe, who led his own fantastic fundraising effort when he was her age.  Lotte not only contributed towards the purchase of new solar lights for Amani but even donated some of her toys to the children.  With solar energy, Amani’s kids will be able to study (and play) past sundown! Thanks Lotte!

Kate Thompson is a Ph.d. Candidate in Anthropology at Stony Brook University with degrees in Community, Environment and Development, Anthropology and World Literature from the Pennsylvania State University. She visited Amani in 2011 with the School for Field Studies. There she began a collaboration with Juma to build an international network, aiming to ensure publicity, fundraising and sustainable growth for Amani. Kate has conducted environmental education research as well as arts and literacy programming throughout East Africa, both with Amani and through her affiliation with the Children and Youth Empowerment Centre in Nyeri, Kenya. Her current work is based southeastern Madagascar exploring the ecological, social and economic implications of illegal poaching.